During Climate Week in NYC, I had the opportunity to speak with many investment practitioners, including CIO’s, fundamental PM’s and analysts on how they are integrating ESG into their investment decision making process. I had a particularly fascinating conversation with Gabriel Thoumi, CFA, who works with two ESG related NGO think tanks in the financial markets space: Planet Tracker and the 2 Degrees Investment Initiative.

One of the topics that we discussed were the ways in which the investment community is looking beyond the use of ESG data for exclusion purposes and increasingly as a means of risk mitigation. Recalling his days as a dedicated fundamental ESG analyst, Gabriel brought up a textbook example, Lumber Liquidators (LL:NYSE), a company that committed serious crimes against the environment resulting in a material negative impact on investors.

The story is a fascinating one, full of intrigue. A Washington, DC based not-for profit, the Environmental Investigation Agency, suspected that there were shenanigans going on in LL’s supply chain and conducted an investigation. Samples of wood were sent to a lab for DNA testing to find the source of origin. LL was determined to have committed fraud byimporting wood manufactured from China which had been illegally logged in far eastern Russia, in the habitat of the last remaining Siberian tigers and Amur leopards in the world. This was in violation of the Lacey Act which had been established in 2008 to protect wildlife and prohibit deforestation in important and protected habitats.

For more detail on the nature of the legal aspect of the violations, please see Gabriel's publication.

In 2013, the company was subsequently fined $13mm for illegally trafficking the lumber and the stock plunged in value.

It is interesting to note that the ESG scores since this judgement continued to deteriorate further, particularly in the area of Management Ethics, and scores were declining across the board. It appears that the monetary fine had very little impact on the company’s subsequent longer-term behavior despite the extreme reaction in the share price.

Do these KPI’s portend negatively for the future? It is easy to be called-out for looking at the story through the luxury of a rear-view mirror, but the lack of improvement in scores should have resulted in a very stern questioning of the management and could have potentially uncovered areas of concern.

Instead of redeeming themselves, the management of LL was about to become embroiled in another reputation damaging incident. In March 2015, the company again came under assault, this time revealed to the public by the CBS News program "60 Minutes" which aired an investigation into the China-made products. LL’s flooring materials were found to leach hazardous chemicals of known carcinogens putting many people at heightened risk of respiratory irritation, asthma, and even cancer. The failure to disclose the use of toxic chemicals presented a material risk to investors and the stock lost nearly half of its value following the news as shown in the chart below: 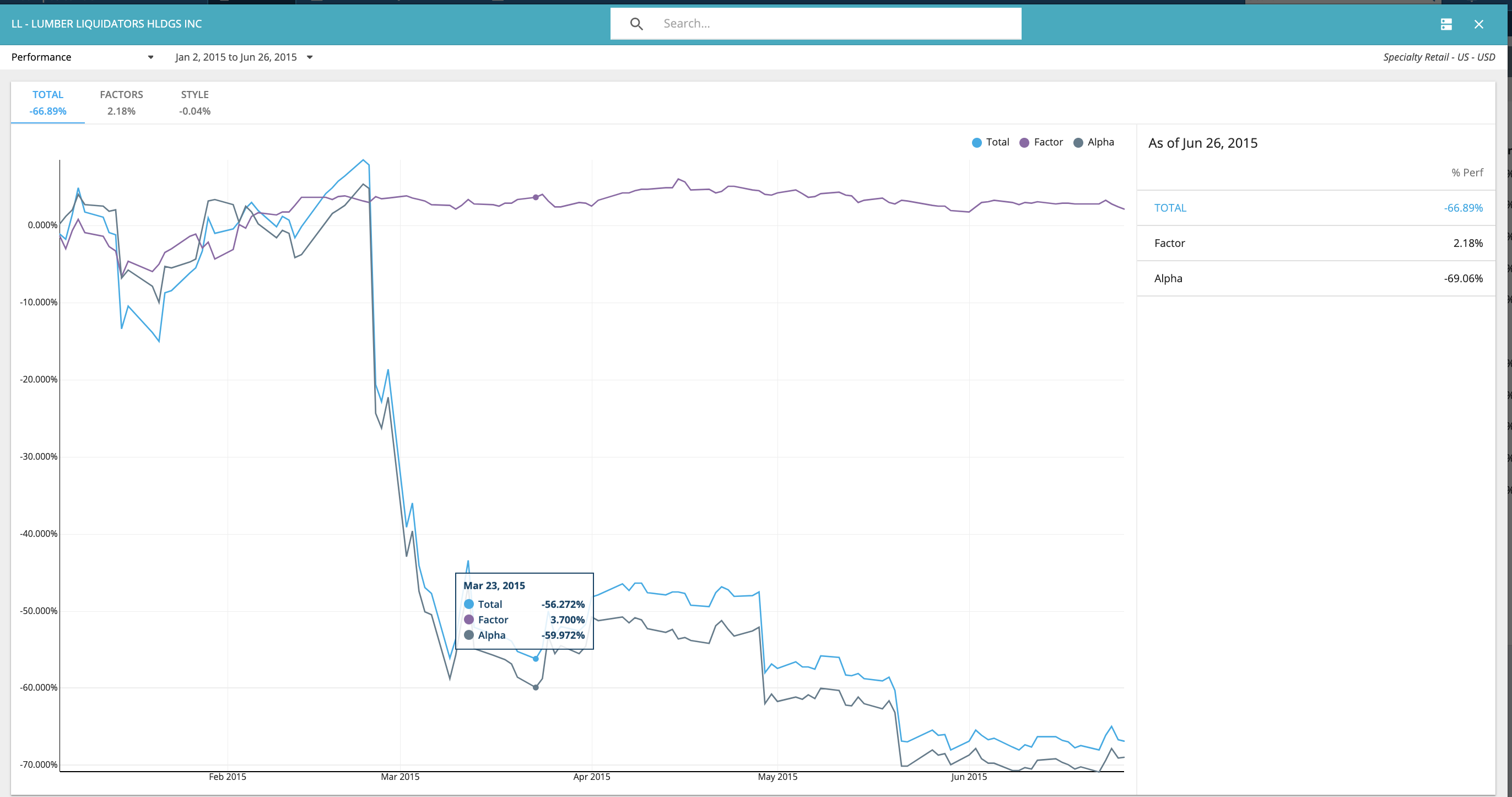 This is a particularly scandalous example, but many lurking ESG problems can be more subtle and no less damaging to your portfolio. As you peel back the onion to investigate a stock’s fundamentals, how can you be confident that the company you want to invest in isn’t the next Lumber Liquidators?

As Stephen Donofrio, who leads Supply-Change.org – a public platform tracking corporate risk related to agricultural commodity supply chains explains: “In my years in economics and responsible investing while at Chicago Climate Exchange and then CDP North America, it’s proven time and time again that companies need to mitigate their supply chain risk at the board level by developing supply chain transparency policies.”

As the number of ESG-minded investors continues to grow, it is becoming increasingly clear that non-financial risk factors such as GHG emissions, workforce issues and governance structure are indeed material to financial performance. A growing number of not-for-profit initiatives, such as the one Gabriel is involved in with Planet-Tracker, will hopefully put pressure on companies to be become genuine stewards of ESG principles. As investors demand compliance from company boards in anti-corruption measures and crimes such as the one committed by LL, we hope that investor’s evaluation of systemic ESG risk exposures will reduce the likelihood of such events. Availability of data will play an important part, as a company’s lack of disclosure will be a bigger red flag than the disclosure of information that may not be entirely positive.

The Problem with ESG Data
We constantly hear about the frustration investors have when interpreting ESG data. We agree that ESG scores are by no means the only step taken in the ESG research process, especially when the benchmarks for comparison are often very murky and non-transparent. As ESG information is built from the laborious process of compiling data from the companies themselves from questionnaires, sources of public information, as well as extra-financial information, the result is a lack of standardization and disparate rankings between providers. The dearth of coverage of smaller cap names is also an important consideration, as in Lumber Liquidator’s case, there are very few ESG researchers covering the company.

Our ESG data partner, Owl Analytics, aims to offer a different solution in evaluating ESG information by providing a consensus view from a wide variety of providers with metrics specific to particular industry segments. The enemy of good enough is perfection when it comes to ESG analysis, and what is important is that the available metrics are interpreted according to an investor’s views and philosophy. Analysis of the data through the Omega Point platform provides a valuable jumping-off point to engage with companies, integrate data into other models (such as factor models), and conduct portfolio screening and peer analysis. 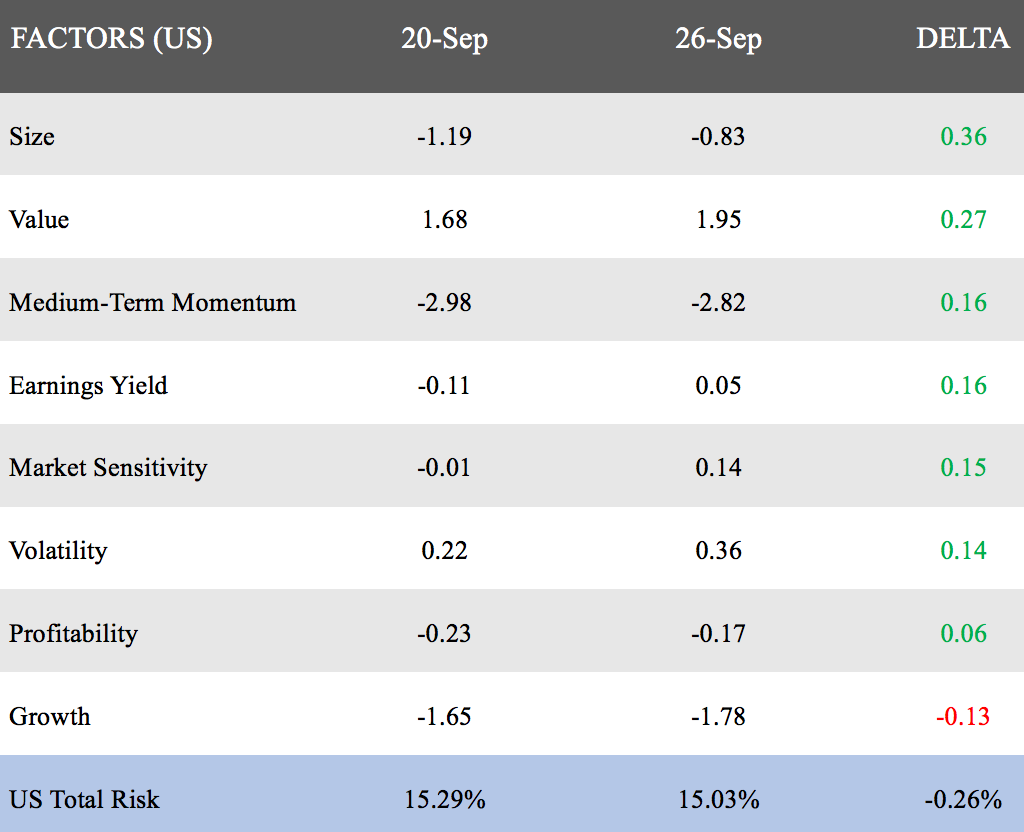 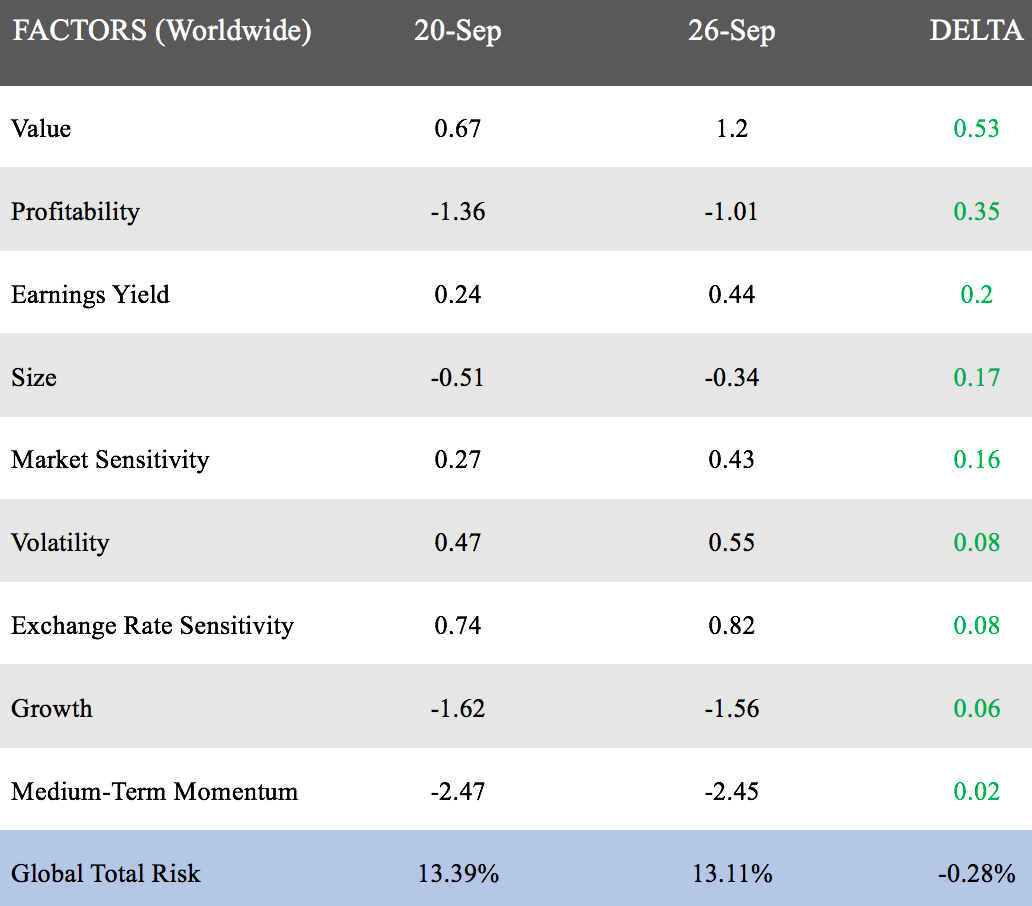 Please don’t hesitate to reach out if you'd like to learn more about our ESG overlay or better understand your portfolio's exposure to factors.