Comparing Factor Performance in a Global vs. US Model

Comparing Factor Performance in a Global vs. US Model

Omer Cedar
March 03, 2019
Typically, the factor trends that we observe in Factor Spotlight are based on our US model. This week, we'll be introducing our worldwide model by taking a look at how some of the major factors have behaved on the global level, compared to what we're seeing in the US.


Before we jump in, here is a quick rundown of factor trends we've seen over the past week in the US model.

A fairly quiet week in the market was punctuated by some weakness on Wednesday, followed by a brief rally on Friday morning stemming from improved economic data out of China. A couple of economic datapoints then served to temper investor optimism, with US personal spending falling to its weakest since Sept 2009, personal income falling for the first time in three years, consumer sentiment falling short, and the ISM manufacturing index sliding to a two-year low. 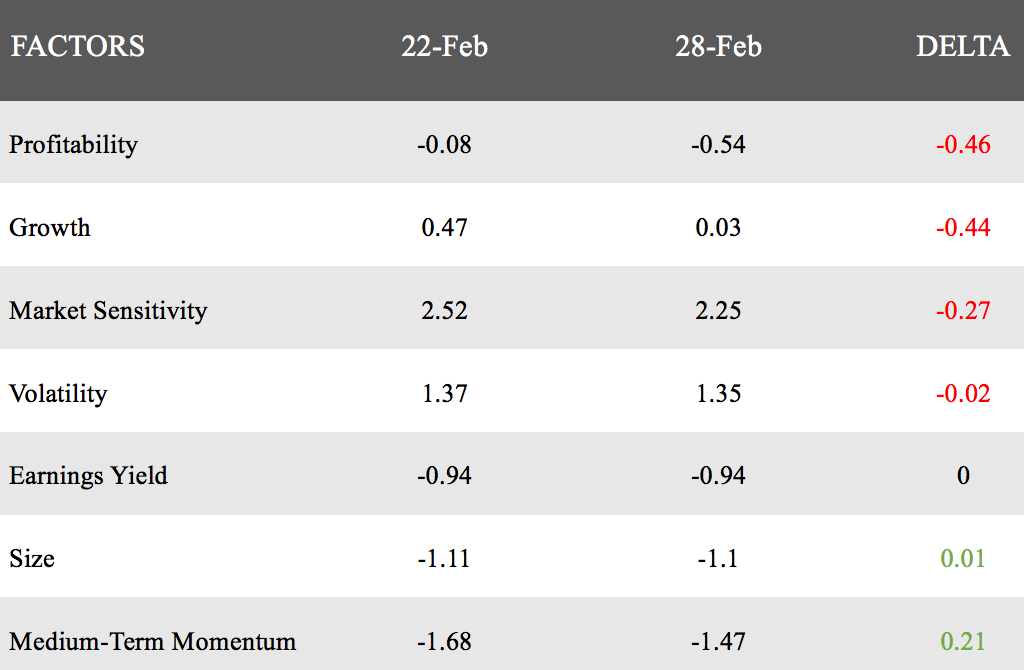 Global vs. US Factor Movement

With international trade driving much of recent market action, it only makes sense to widen our scope and analyze how some of the major factors have performed at the global level, rather than just the US. Below, we'll be taking a look at how Momentum, Value, Growth, Volatility, and Beta have performed in both the worldwide and US models. Today we'll focus on the trailing 6 months, which spans the period of market volatility that started in early October 2018.

While Value has seen poor performance over the past 6 months, it has underperformed by ~2.48% in the US model on a cumulative basis. It appears that the rally in the factor at the beginning of 2019 was more profound at the global level, lifting the factor into positive territory for a while before seeing a pretty steep drop in Feb. Meanwhile, the US version of the factor reached a higher peak in the normalized index, almost reaching Overbought levels in early Feb before falling to Neutral territory today.
Growth
Worldwide Model                                               US Model

Returns for Growth saw some tangible differences between the two models, as the factor has seen positive cumulative performance in the US model, while it's down 70bps in the Worldwide model. At the same time, the factor is being flagged as Overbought on the global stage while it's Neutral in the US.

Because the US market is such a major component of the global market, it's not surprising to see key factor trends line up pretty closely between the two models. The most distinct difference between the two seems to be an increased appetite for growthy stocks in the US market over the past couple of months, although even that disparity is pretty muted when normalizing for historical return.

In the next few weeks we'll be doing more work in digging into factor movement in other countries and seeing what value we can derive from using an international lens for factor analysis.

As always, if you'd like to see how these factors look in your portfolio, or would like to better understand how you can mitigate factor exposure, please don't hesitate to reach out.