Where's the Ceiling for volatility & Beta?

Where's the Ceiling for volatility & Beta?

Omer Cedar
January 27, 2019
Never a dull week, even with the market taking a day off on Monday. With Volatility and Market Sensitivity both at “Extremely Overbought” levels, we'll take another look at these factors in a historical context to better understand where they are in relation to the market recoveries of 2009 and 2016.

In an abbreviated week, uncertainty from the government shutdown superceded a generally good start to earnings season, then gave way to a sizable rally on Friday. The S&P 500 is essentially now back to where it closed at the end of last week. So far, companies have beaten consensus estimates at a pace similar to 3Q18. Investors were cheered by news of an interim deal to re-open the government, as well as reports from the Fed that it may end the QE unwind in the near-term (Friday's market action not captured below).

Factor Update
Here's an update on how some key factors have changed in our normalized returnindicator over the past week: 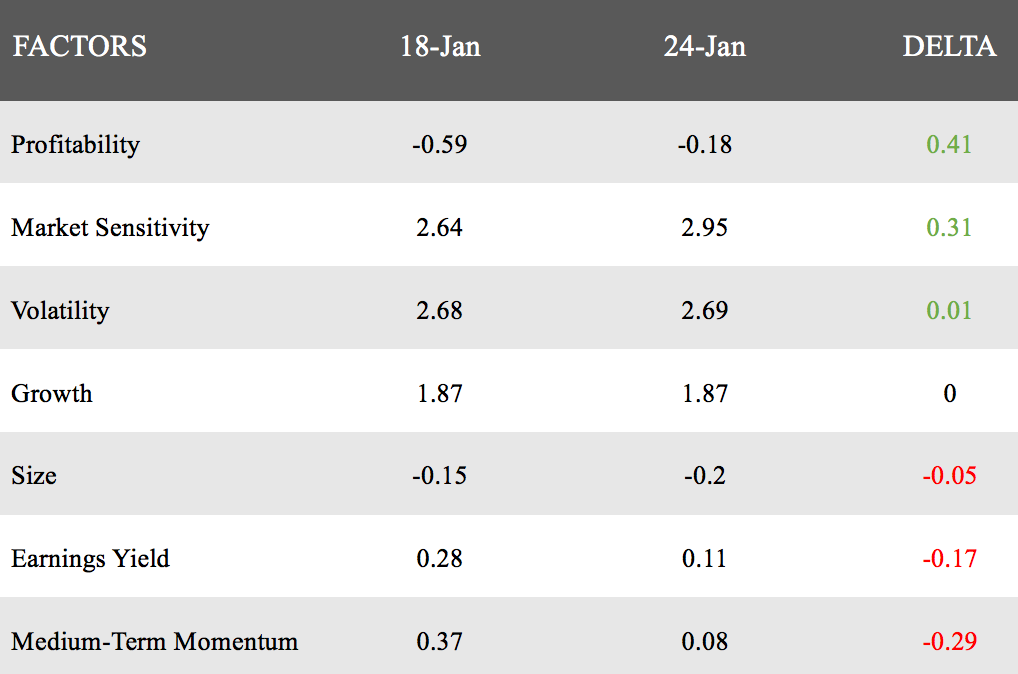 Volatility fell 68bps on a cumulative basis, and has started to flatten out on a normalized basis after a few weeks of considerable strength (+2.53 standard deviations YTD).

Currently sitting at +2.69 standard deviations above the mean, we wanted to get a feel for where Volatility had topped out in previous recovery regimes.

During the major equity market rally in Spring 2009, Volatility reached a normalized apex of +1.98 standard deviations (on 4/13/09), before reverting back towards the mean.

As the market recovered in the months after "Factormageddon 2016", Volatility caught a big tailwind as investors started putting risk back on. At its peak, it reached +2.49 standard deviations above the mean on 3/22/16, and then started to cool off into the summer months.

Beta continued to see strength on a normalized basis (+0.31 SD in the past week), and now sits just shy of a rarely seen +3 standard deviations above the mean.

Looking back historically, we can see that the factor is currently at a height somewhere in between where normalized return crested during these other periods of recovery.

In the wake of the Global Financial Crisis, Beta rallied to a peak of +2.54 standard deviations above the mean (on 4/17/09), prior to gently reverting back towards the historical trend.

In this recovery, we can see a time when normalized valuation for Beta was stretched to an extreme similar to today's. On March 22, 2016, the factor peaked at +3.16 SD before reverting back to its historical trend.

These historical charts show that normalized returns for Volatility and Market Sensitivity are at levels seldom seen, even during times of rapid market recovery. Volatility appears to be in the process of plateauing, after which it's reasonable to imagine a reversion back to trend. Market Sensitivity appears to still have some room to go, provided the analog of its 2016 performance - but we are likely to see a reversion in the near future there as well. In the meantime, Profitability has slowly continued on its upward trajectory, and it will be interesting to see how the relationship between these three factors plays out if returns for the first two factors start to go south.

We'll continue to keep an eye on these trends as we head into another week of earnings, including some market bellwethers such as Caterpillar, Apple, and Amazon. As always, if you'd like to see how these factors look in your portfolio, or would like to better understand how you can mitigate factor exposure, please don't hesitate to reach out.