Investors often look to good ol' beta as the tried and true mechanism for hedging market risk in their portfolios. However, many have noted that lately, beta feels “broken”.

Hedging beta no longer seems to have the desired effect of mitigating risk in portfolios, and in fact, investors who have tried to hedge beta in 2020 and 2021 will have found major headwinds as the beta factor took off on a wild ride in the post-COVID era.

A look at the Beta factor from the MSCI Barra Global Equity Model illustrates this well. 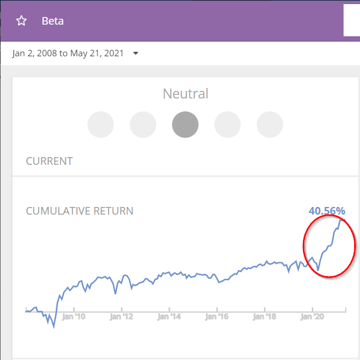 While the chart above shows that there was a similar behavior in the performance of the Beta factor coming out of the Global Financial Crisis in 2008 and 2009, investors will tell you that beta “feels” different compared to any time in recent history.

To investigate this, we went back to basics to answer the very simple question: does beta still explain market movements?

Does Beta Explain the Market?

For our analysis, we will use the following risk models: Axioma Worldwide 4 Medium Horizon (“Axioma Worldwide”), Axioma US 4 Medium Horizon (“Axioma US”), MSCI Barra Global Equity Model (“Barra Global”), and MSCI Barra US Equity Model (“Barra US”). Rather then rely on analysis from a single model, we are leveraging the views of multiple risk models to further confirm whether or not the changing relationship of beta to the market is prevalent across universes and methodologies.

A chart of the Beta vs Market factor correlation for the global models shows us that historically, our expected relationship has held, with correlations between 0.8 and 1 for much of the period since 2008. However, the past few years have shown a major decoupling of beta from the market. The events of 2020 and 2021 have only proven to accelerate that decoupling, with the correlation from the Axioma Worldwide model currently at 0.56 and the Barra Global model at 0.68.

A chart of the correlations for the US models shows an even steeper unraveling for the Beta vs Market factors.

Though beta is not intended to be a perfect indicator for market volatility, we see that it is even farther from perfect in today’s market environment where many other systematic effects are at play.

Is There Any Hope for Beta?

So, what does the above tell us? In short, if historical beta no longer correlates to the market, it may no longer be an effective tool for reducing market risk in your portfolio. One silver lining that we can offer is that all correlations presented above appear to be showing a small uptick as of the past few weeks. Perhaps this is a sign that market dynamics might be marching back to “normal” as the global reopening accelerates. However, it remains to be seen which direction beta will ultimately go, and it is also possible that the current relationship of beta to the market will persist. If that proves to be the case, investors need to be prepared to look for alternative tools to more adequately mitigate risk.

In future editions of Factor Spotlight, we will continue our investigation into the efficacy of beta as a market risk hedging tool and offer potential alternatives to the traditional beta-hedging strategy.

Please note: Factor Spotlight will be on hiatus next week in observance of Memorial Day, and will resume publication on Sunday, June 6.