Before we dive in to this week’s topic, I want to remind our readers that there’s still time to register for our joint webinar with Qontigo on June 23 titled: Macro Matters, Even for Fundamental Managers, and we hope that you can join us. Now on to this week’s coverage.

With today’s turbulent markets, the rise (and often subsequent fall) of the “meme stock,” and retail crusaders stepping into their newfound market influence, it feels as though the fear of the short squeeze driving funds into billion-dollar losses is higher than ever. Investors have a laser focus on the next squeeze that could rock their short book and need tools to identify their vulnerabilities in this arena better.

There has been high demand from Omega Point’s audience to incorporate short interest data as part of the factor analysis and portfolio construction workflow, and we’re now pleased to announce that we have partnered with S3 Partners to make their Short Interest and Securities Finance Data available via the Omega Point Data Cloud.

S3 Partners is a widely recognized expert on short interest and crowding trends, and investors have recently sought their insight to sift through the retail trading rally and meme stock craze. S3 has become a leader in the space by providing the only truly up-to-date, independent, and unbiased view of short interest, crowding, and rates analytics for stocks. Their dataset goes back to 2015 and provides comprehensive coverage for global equity markets.

To welcome S3 to the Omega Point platform, this week’s Factor Spotlight will focus on key highlights of the dataset and introduce valuable workflows that will come from overlaying the short interest data side by side with our risk management tools. For full details on S3’s analytics, please see the S3 Short Interest and Securities Finance Data and Analytics methodology paper.

An Overview of S3’s Analytics

Many investors are well aware of the usefulness of using short interest data as indicators of short alpha and as a risk mitigation tool to avoid short squeezes. However, what investors may not be as keenly in tune with are some of the pitfalls that can come from using untimely or incomplete data around short interest. A common measure used in this area is Short Interest as a % of Float (“Common SI % of Float”), defined as the number of shares shorted divided by the number of shares available to trade.

Despite its widespread use, this calculation is flawed in two main ways:

The physical stock movement and participant activities to settle a short trade in AAA stock are:

The implication here is that float understates tradeable shares, which means that Common SI % of Float overstatesshort interest crowding in a name. This also implies that the Common SI % of Float can often exceed 100%, which dampens the intuition around the metric. The number starts to lose its interpretability in these cases because investors don’t have an intuition for the ceiling.

Using S3’s analytics, investors can rely on an improved measure:

The S3 SI % of Float provides an up-to-date view of short sentiment and a more holistic and accurate view. This measure will never be above 100%, and as such, S3 suggests that their metric gives investors a better sense of when a stock is in a dangerous range. The recommended “ceiling” is around 60%, as it is very rare to have more than 60% of float + synthetic longs in the lending pool.

Leading into the January 2021 short squeeze event, GME’s Common SI % of Float (blue line) was almost 140% and was consistently so for several months beforehand. Analyzing this metric when it is above 100% could lead investors to make illogical conclusions or, even worse, start to ignore the warning signs of high short interest because there is a lack of intuition for what threshold is cause for concern. However, we see that the S3 SI % of Float (green) was near the ceiling of 60% for some time, and this could have been a more meaningful warning sign to investors that GME was at high risk for a short squeeze.

Of course, a high SI % of Float is a necessary but not sole condition for a stock to be in danger of a squeeze. S3 also provides insight into borrow rates and utilization so that investors can further narrow the scope to the names that have additional alarm bells.

Based on our conversations with investors, we have found that stocks with utilization above 80% and rates above 10% tend to indicate that a name is at risk of a short crowding event. As we see in the screenshots above, GME was firing off alarms beyond just the S3 SI% of Float, with utilization above 90% and borrow rates nearing 30% days before the squeeze. Investors using the S3 dataset earlier this year may have been able to take swift action before facing losses on the GME trade.

Finding the Next Potential GameStop or AMC

Omega Point’s screening tools powered by data from our risk model and content partners provide an easy way for investors to identify stocks with early warning signs of potential squeezes or crowding-driven events. To illustrate this, we used the Security Screening tool along with the S3 data and the MSCI Barra US Total Market Risk Model (“Barra USSLOW”) to create a simple screen to find names trending in a dangerous direction.

Our initial search criteria was:

The filter on specific risk from the Barra USSLOW model allows us to find highly idiosyncratic names, which is often a symptom of stocks that are being impacted by crowding. We also looked for stocks with high utilization and expensive borrow rates as a sign of crowding. This filtering yielded a universe of 66 securities as of June 15, 2021, that warrant a watchful eye, especially if they exist in a short book or a hedge basket. From there, we looked for the names with the highest S3 Short Interest as a % of Float (“S3 SI % Float”) to identify the especially risky stocks.

Below are the top 10 names by S3 SI % of Float that met our screening criteria (excluding SPACs) as of June 15.

With the addition of S3’s short interest data to Omega Point’s Data Cloud, investors can deploy a systematic and robust framework to proactively identify risky names in their short books, such as the ones we’ve highlighted above.

Next week’s Factor Spotlight will further analyze the S3 Short Interest dataset and highlight additional high-value ways for investors to leverage the data within their fundamental portfolios.

If you are interested in understanding how the S3 Short Interest dataset can provide insights into your research and portfolio, please click here to request a complimentary analysis of your portfolio using the S3 dataset. 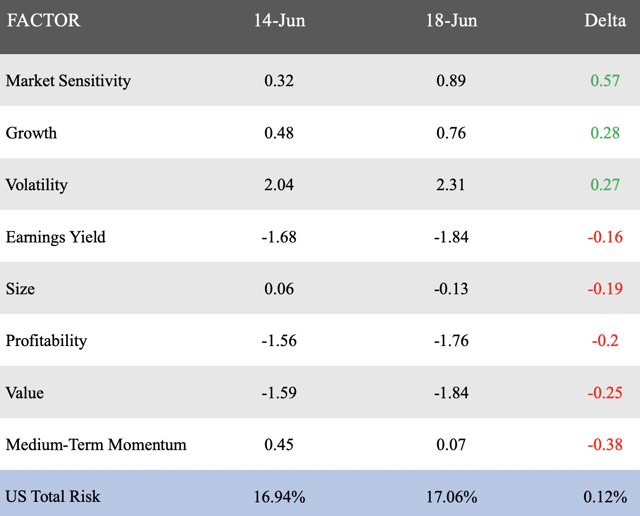