Is the Overheating Economy Cooking Your Portfolio?

Is the Overheating Economy Cooking Your Portfolio?

This past week saw interesting and polarizing news, as the CPI and PPI releases yielded mixed feelings in the market. CPI rose 0.5%, which CNBC noted was in line with expectations based on the consensus from economists surveyed by Dow Jones, and Core CPI came in lower than expectations, rising only 0.3%. However, as outlined by MarketWatch, PPI jumped up higher than expected, rising by 1% compared to a 0.6% expected increase based on a poll of economists surveyed by the Wall Street Journal.

Some believe that the slowing behavior of CPI growth is reason to believe that the overheating economy is a transitory trend. However, others point to the increasing rate of PPI growth and the July PPI number coming in higher than expectations as evidence that the concerns around inflation are very much justified. There’s even a third camp emerging of those concerned about the economy falling into a stagflation environment. The economic re-opening shows signs of decelerating as the Delta variant rampages while inflation continues to rise.

No matter which group you fall in, it’s clear that inflation is top of mind for the investment community. So this week, we will leverage the Inflation factor from the Axioma Worldwide Macroeconomic Projection (“Axioma Macro”) risk model to investigate which segments of the market deserve the most focus from investors grappling with inflation-induced anxiety.

Getting Our Bearings on Inflation Exposure

Interestingly, the Inflation exposures for the Russell 1000 stocks have declined on a year-to-date basis. After reaching a peak of 9.2 in late March, the median exposure plummeted to its current level of 3.7. The 95th percentile saw an even steeper trend, falling from a YTD high of 20.1 in March to the current level of 9.8. Not only did the exposures decrease across the board, but the dispersion of exposures across the index tightened as well. This tightening indicates that the Russell 1000 securities are all converging in their levels of exposure while general sensitivity to inflation has declined.

We can also break this down by sector by calculating the median Inflation exposure across the 11 sector SPDR ETFs.

While it is clear that energy has the heaviest inflation sensitivity, a different sector emerges as the leader when we focus on dispersion measured by the spread between the 95th and 5th percentiles.

XLY (Consumer Discretionary SPDR ETF) consistently shows the most significant dispersion of any sector and even beats out the Russell 1000 for most of the YTD period. While XLE overall may have a high sensitivity to inflation, the most sensitive consumer discretionary stock looks much different from the least sensitive stock.

As intuition would tell us and the data confirms, if you are an investor focusing on the energy sector, where Inflation exposures are high and dispersion within the sector is low, you are almost certain to find your portfolio to be quite sensitive to inflationary pressures. However, suppose you’re focused on sectors like consumer staples, where the Inflation exposures are generally low, or consumer discretionary, where the dispersion of exposures is very high. In such cases, you may likely find your portfolio underexposed to rising inflation vs. the rest of the market.

Inflation Volatility is On the Rise

One might view the above analysis as a sign that inflation is a transient concern related to a direct impact on equity assets. As a result, assets across the market are becoming less sensitive to the Inflation factor, and dispersion is generally decreasing. However, even though asset sensitivity is waning, the predicted volatility of the Inflation factor suggests a different story.

After several months of declining volatility from earlier this year, the trend reversed in May 2021 and has been rising since, currently at 0.72%. The 10-year average volatility is only around 0.55%, which tells us that Inflation exposure is riskier than historically. This heightened exposure means that the 95th percentile Russell 1000 stock with a current Inflation exposure of 9.8 could experience a performance impact of 7.1% if the Inflation factor realizes the level of volatility predicted by the risk model. For the 95th percentile stock in the Energy SPDR ETF with current exposure of 14.6, the performance impact could be upwards of 10.5%.

The above analysis highlights that inflationary pressures can easily overpower sector allocation and alpha research within sectors depending on your specific sector exposures. The future is still unclear about inflation as the economy continues trying desperately to reopen. However, investors should always remain wary and seek transparency on the inflation sensitivities in their portfolios. 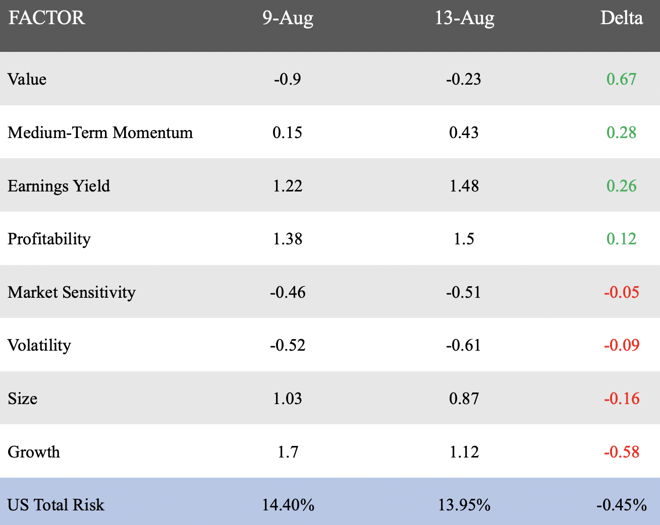