Since we're in the thick of earnings season, this week we'll be examining the market's responsiveness to earnings by looking at how company exposure to the fundamental factors of Growth and Profitability have changed thus far during the 1Q reporting period. Ultimately, we'll highlight the companies in the Russell 1000 that have seen the most movement in their Growth and Profitability scores in the month of April. We'll also provide an update on how overall risk has been trending in the US and worldwide.

This busy earnings week saw generally positive reports (75% of the 229 S&P 500 companies that have reported beat earnings estimates), despite some weakness from large names like Intel, 3M, and Exxon. The S&P 500 hit a record high, and a big headline US GDP print suggested that growth accelerated in the first quarter (driven by high inventories). At the same time, US Commerce Department data showed that consumer and business spending slowed down, and homebuilding investment contracted for the 5th straight quarter.

Here's an update on how some key factors have changed in the US model over the past week, using our normalized return indicator. Going forward, we'll be adding a row for Total US Market Risk (using the Russell 3000 as a proxy). 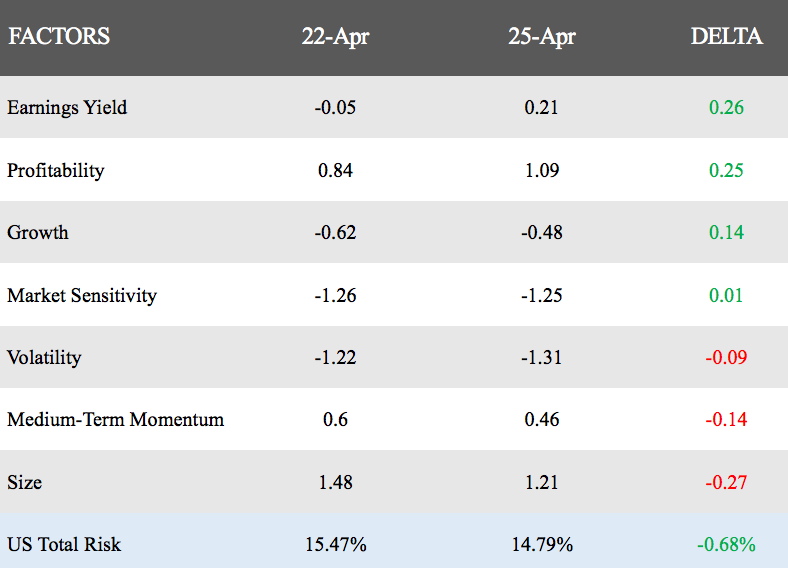 Total Risk Update
Following up on our last two Factor Spotlights, here's an update on how Total Risk in the US and worldwide is trending, using the Russell 3000 and ACWI indices as our respective proxies. 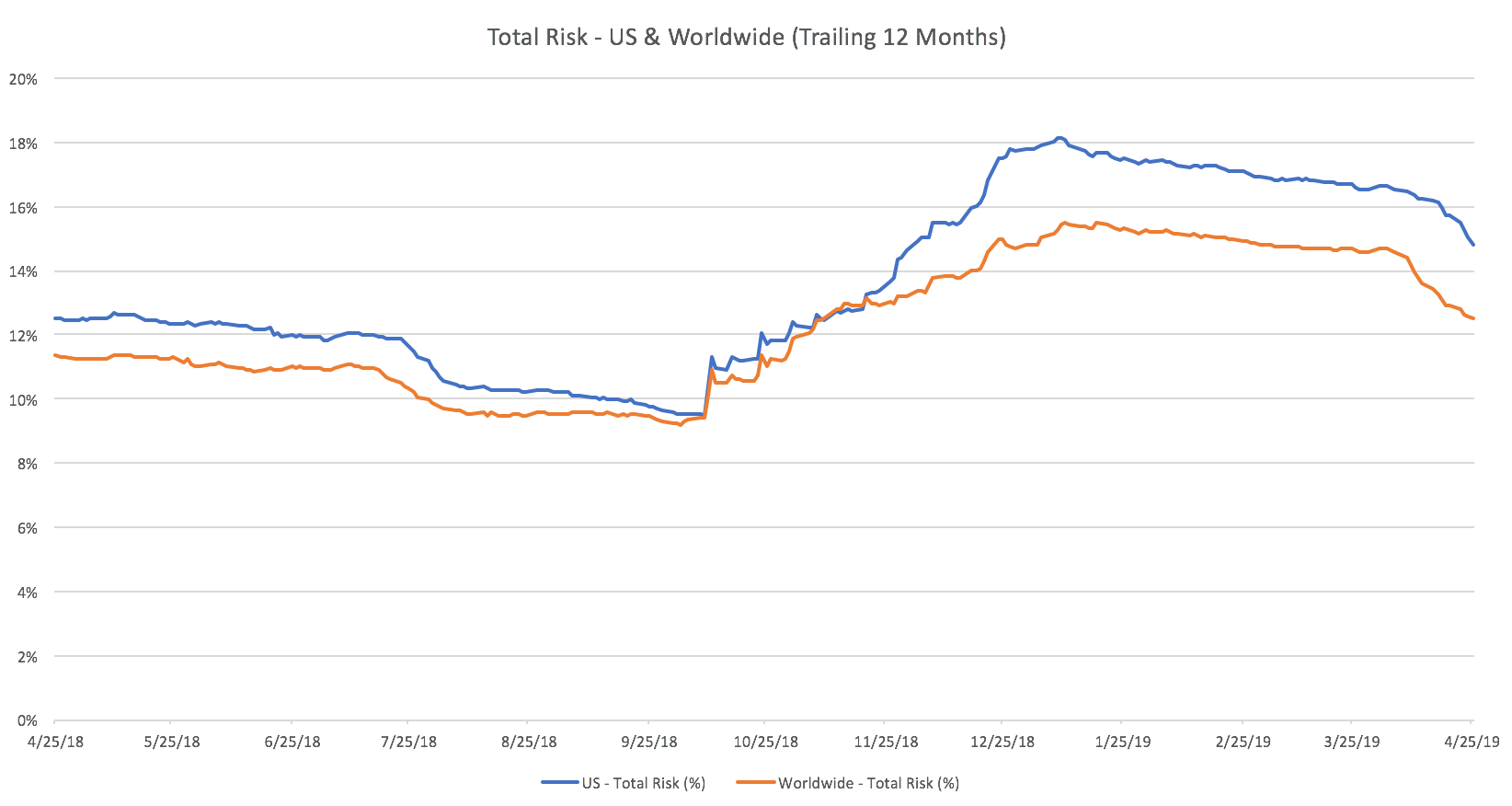 In February, we discussed how Growth and Profitability factors typically see the most impact during earnings and periods of early market recovery. This is because these factors are calculated using fundamental data, rather than price information. Thus, movement in these factors can show us the impact of analyst re-ratings, changes in analyst estimates, etc.

Now that we're in the midst of another earning season, let's take a look at how exposure to Growth and Profitability have moved since early April for the constituents of the Russell 1000. Even if a company hasn't reported yet, it can still be rerated due to read-throughs from within its peer group.

Methodology: We took a snapshot of Growth and Profitability exposure for the constituents of the Russell 1000 on April 1st and April 25th and then calculated the delta between the two dates, in order to find the companies that have had the highest net relative positive and negative change in exposures to these factors. Let me know if you'd like a .csv with the entire dataset and I'll email it to you. 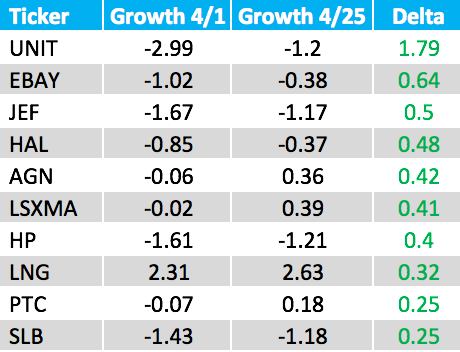 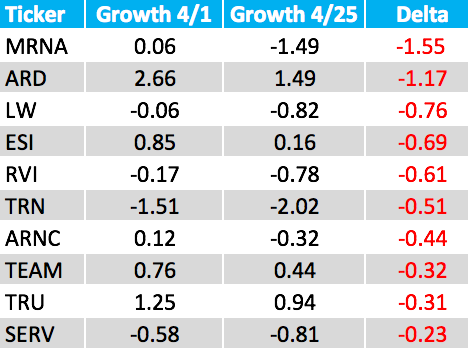 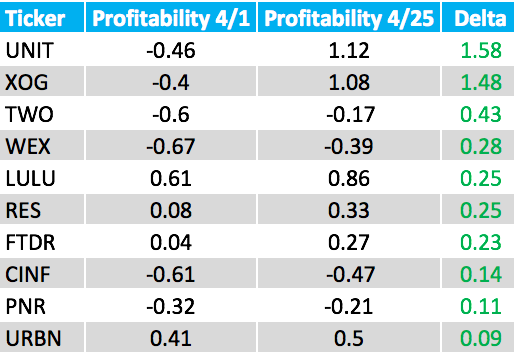 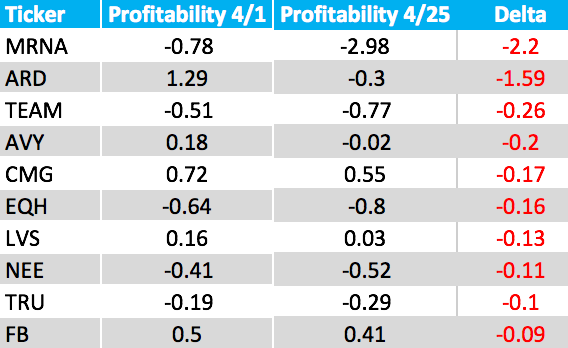 Takeaways
Interestingly enough, some of the biggest movers in the above lists weren't catalyzed by an earnings announcement. Uniti (UNIT), for instance, saw the highest rerating in both Growth and Profitability exposure stemming from positive news about a lawsuit related to its former parent company. MRNA, which was the biggest loser for both factors, hasn't reported yet but experienced a volatile April after IPOing in December.

EBAY, on the other hand, saw a big pop in Growth exposure after beating the street on EPS and revenue on 4/23. Jefferies (JEF) missed on EPS when it reported at the end of March but has seen analyst estimates improve over the past month, resulting in a less negative Growth score. Atlassian (TEAM) disappointed the street on 4/17, and has seen a negative rerating for both factors in kind.

All told, while some of these large deltas were due to company-specific items unrelated to earnings, most of these moves can be ascribed to an earnings announcement or peer announcement.

Something else to keep in mind is that in our February analysis, we determined that:
Next week, we'll take a look at how exposures have changed at the Industry Group (GICS 2) level, to see if we can gain broader insight into the impact that earnings has had on Growth and Profitability metrics. If you'd like to discuss factor moves during earnings in greater detail or better understand your portfolio's relationship to factors, please don't hesitate to reach out.