Overbought/Oversold Factors Around the World

Overbought/Oversold Factors Around the World

We’ve spent the past couple of weeks focusing on Momentum and Growth (both of which are continuing to revert to the mean on a normalized basis). Today, we’re going to pull back the lens and examine factor trends in our US and Worldwide models, in order to identify some other themes that are playing out right now.

First, let’s take a look at the past week's market and factor action: 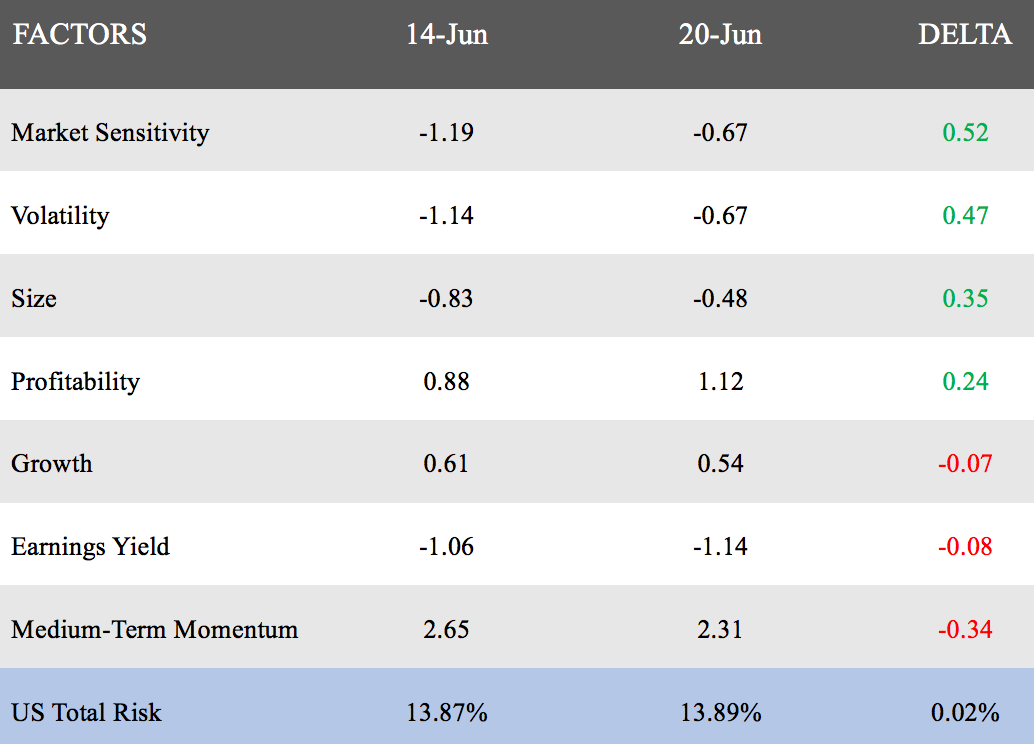 Overbought/Oversold Factors in the US and Abroad

As we continue to follow the reversion pattern that Growth and Momentum have exhibited in the US over the past two weeks, we wanted to expand the field of factors we observe to include all currently overbought and oversold factors in the US and Worldwide models.

Momentum - US
We’ve discussed this factor at length over the past two weeks, but it bears repeating that the factor had reached its second highest peak ever modeled on 6/10/19 (+2.79 SD above the mean). The factor is continuing to revert towards the mean, and if it echoes past behavior, will continue to fall sharply into Oversold territory before reversing the trend.

Dividend Yield - US
Another “Extremely Overbought” factor, Dividend Yield currently sits +2.28 standard deviations above the mean. This factor has seen a meteoric rise since bottoming out at -2.16 SD below the mean on 3/21/19. It seems likely that significant declines in bond-market yields have helped stocks with high dividend yields perform well as of late, particularly with Fed rate cutting expected in the near-term.

Profitability - US
This factor recently entered Overbought territory, after being nearly 3 SD below the mean at the end of 2018. It appears that even in a record-setting market, investors have been targeting quality stocks with strong return-on-equity, return-on-assets, cash-flow-to-assets, cash-flow-to-income, gross margin, and sales-to-assets.

Leverage - US
This factor, which measures company exposure to debt levels via a blend of debt-to-assets and debt-to-equity, hit a peak on 2/5/19 at +1.99 SD above the mean (just shy of an Extremely Overbought designation). It then hovered around neutral territory, and has since sold off to -1.82 SD below the mean today.

Value - US
Value has been out of favor for the past couple of years, although on a normalized basis has seen some pretty extreme movement since peaking at +1.91 SD above the mean on 1/30/19. After climbing to similar heights of +1.78 SD above the mean on 5/15/19, the factor has seen a steep selloff and is continuing to travel deeper into Oversold territory.

Earnings Yield - US
Even as Profitability continues to get bid up higher into Overbought space, Earnings Yield (the other arbiter of quality in stocks) has seen weakness on a normalized basis and is seen as Oversold in our framework. It does appear that the curve of the downward trend appears to be flattening, so we might expect to see a reversion in this factor sometime in the near future.

Momentum - Worldwide
Just like we’ve observed in the US model, Medium-Term Momentum saw a pretty substantial rally on a normalized basis, peaking at +2.77 SD above the mean on 6/7/19. As global momentum is strongly weighted to the US version of the factor, it is not surprising that it’s already starting to revert towards the mean, but at +2.16 SD above, it still has a generous amount of room to run back down and remains Extremely Overbought.

Growth - Worldwide
Global Growth followed a similar trajectory to that of its US counterpart, but actually saw even more strength relative to historical trend over the past month. The factor hit an apex of +1.9 SD above the mean on 5/31/19 and has since started to revert, now sitting at +1.24 SD above the mean.

Market Sensitivity - Worldwide
In another chart that tracks its US counterpart very closely, global Beta hit a high point of +3.26 SD on 4/4/19 and had since experienced a fairly steep reversion, bottoming out at -1.67 SD below the mean on 6/3/19. The factor has started to bounce back, but remains in Oversold territory today.

Value - Worldwide
Global Value has followed the same trend as its US counterpart, with some recent strength in May turning into a sell-off relative to historical trend in June. The factor appears to have reached a nadir of -1.22 SD below the mean on 6/18/19, and the trendline is pointed back up for now. We can expect to see a near-term reversion in Value names in both the US and Worldwide models.

We’ll continue to monitor these factor trends as well as other themes worth tracking (next week we’ll discuss geopolitical risk as a factor). If you’d like to better understand your portfolio’s relationship to these (or any other) factors, or have questions about our normalized return framework that produces these Overbought/Oversold designations, please don’t hesitate to reach out.