Last week, we shared the companies in the Russell 1000 that had seen the biggest changes in exposure to the fundamental factors of Growth and Profitability since the beginning of 1Q earnings season. Today, with more earnings in the rearview, we'll run the same analysis at the Industry Group (GICS 2) level in order to see what more we can learn about the market's response to earnings via these two factors.

The market stayed flattish over the past several days - first taking a slight dip mid-week due to market cooling comments out of the Fed, then popping back up on Friday (not captured in above chart) on strong labor data. US job growth surged in April, while unemployment dropped to its lowest rate since December 1969. In other good news, 75% of the 400 S&P 500 companies that have reported have topped profit estimates.

Here's an update on how some key factors (and US Total Risk) have changed in the US model over the past week, using our normalized return indicator. 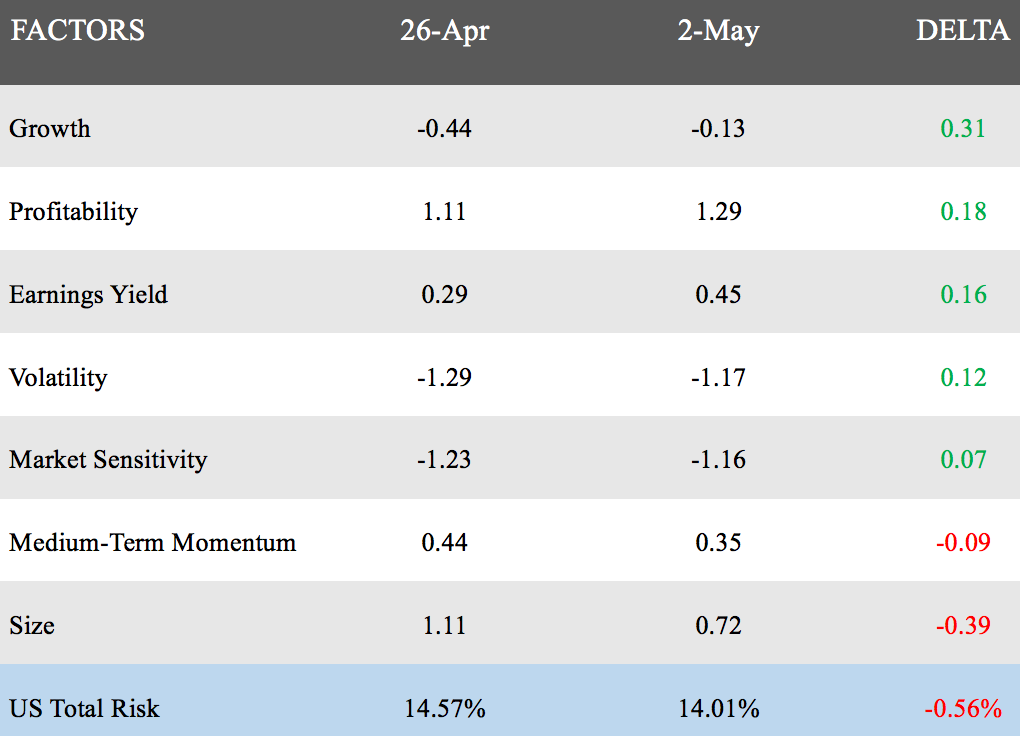 We took a look at exposure to Growth and Profitability for the constituents of the Russell 1000 and then rolled them up to the Industry Group (GICS II) level.

As a refresher, the Growth and Profitability factors typically see the most impact during earnings and periods of early market recovery because they're based on fundamental data, rather than price information. Thus, movement in these factors can show us the impact of analyst re-ratings, changes in analyst estimates, etc.

Methodology: We took a snapshot of Growth and Profitability exposure for the constituents of the Russell 1000 (equally weighted) on 4/1/19 and 5/1/19, then calculated the delta between the two dates. We then aggregated company exposures at GICS Level 2 in order to find the Industry Groups that have had the highest net relative positive and negative change in exposures to these factors. All exposures are presented as z-scores.

Absolute exposure for Growth in the Russell 1000 remained flat at -0.08 between 4/1 and 5/1. Digging deeper, here's how exposure to Growth changed at the Industry Group level:

Here we can see that the biggest Growth rerating so far during earnings has been in Energy, with an increase resulting in a less negative exposure to Growth. Insurance and Financials (ex-Banks) also saw their relationship to Growth become slightly less negative during this time.

On the flip side, we can see that Materials saw an increase in negative exposure to the Growth factor, while Software experienced a slight decrease in its usual extremely high exposure to the factor.

Just like Growth, Profitability exposure for the equal weighted Russell 1000 remained constant at -0.09 between these two dates, but there was some movement at the Industry Group level.

Here we saw Real Estate have the most movement, with some slightly reduced negative exposure to Profitability. Energy popped up here again as well, raising its exposure out of the negatives and becoming completely neutral to the factor.

Very slight changes here as Materials and Pharma exposure became slightly more negative, and the changes in the rest of the top 5 were fairly muted.

With net exposure for Growth and Profitability in the Russell 1000 remaining flat over the past month, we didn't expect to see huge deltas when running this exercise. We were still surprised to see how slight the changes were, with the biggest rerating out of all industry groups being Energy at +.006 Growth exposure. Insurance, Financials, and Banks also saw small increases in their exposure to Growth and Profitability during the earnings period. Perhaps the one interesting note on the negative side is that the Growth-obsessed Software group saw a decrease in its exposure to that factor during this time.

Next week, we'll be looking at a different set of factors through this same lens to see if there are any notable read-throughs. If you'd like to learn more about your portfolio's relationship to factors, please don't hesitate to reach out.