Omer Cedar
March 17, 2019
Last week, we took a look at the Growth picture in the US, China, Japan, and Canada in the lens of our global model. Today, as we continue our series on global factor trends, we'll assess how Value factor screens within global indices, to see where investors might find the most Value-friendly markets abroad.
Before we begin, here's a quick rundown of market and factor trends that we've seen over the past week in the US model.

The market saw continued strength after last Friday's substantial rally, and the major indices were on pace for their highest weekly gains in a month. Investors were encouraged by continuing headlines on US-China trade negotiations, and by verbal commitments out of China to maintain strong stimulus measures to address recent weakness in output. In the US, manufacturing activity in New York state expanded at a slower rate than expected, while consumer sentiment rose in March according to the University of Michigan's index. 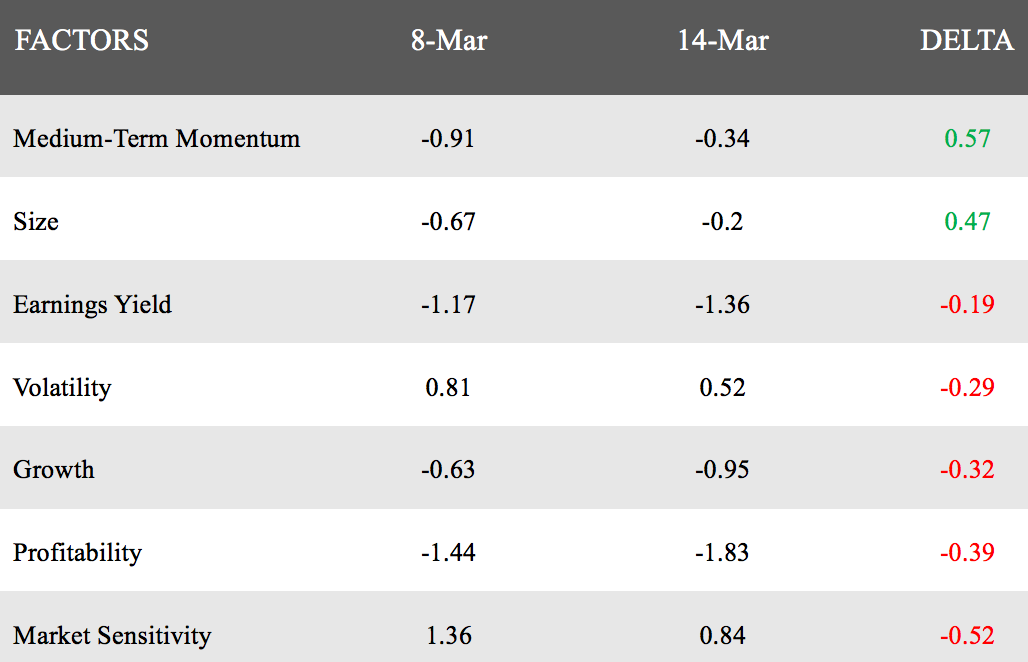 Value Around the World

Using the same approach that we implemented last week for Growth, we'll now look at Value in the ACWI index within our worldwide model. For our purposes, Value factor is defined as Book-to-Price.

Methodology: We took the constituents of the MSCI All Country World Index (ACWI) and identified which companies had a +1 or -1 exposure to Value in the global model. We then created an equal-weighted long/short Value portfolio out of the names that achieved that criteria, then charted exposure to the factor at the country level.

Let's dive into a few notable countries — starting with the US — to better understand how they've historically tracked in their net Value exposure. 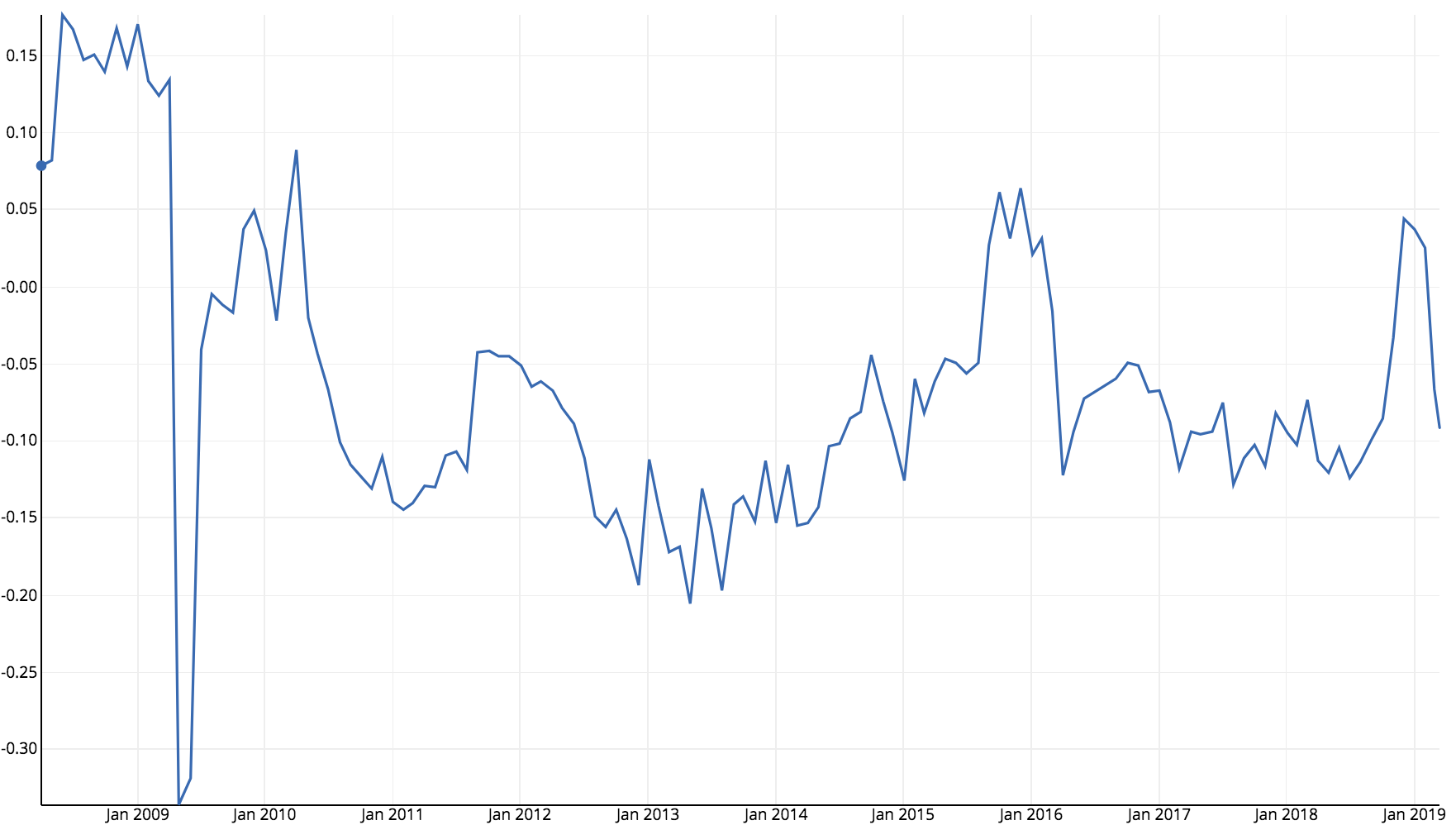 The US has exhibited mostly negative exposure to Value over this period, seeing its highest levels prior to the early-2009 market rally. It then saw a massive drop-off before heading back into positive territory towards the end of 2009. Peaking at 0.09 in April 2010, exposure to Value fell again and didn't become positive until the Fall of 2015. It plunged again after Factormageddon 2016, then saw a most recent peak of 0.04 in December 2018, and has since dropped to -0.09, where it currently resides. 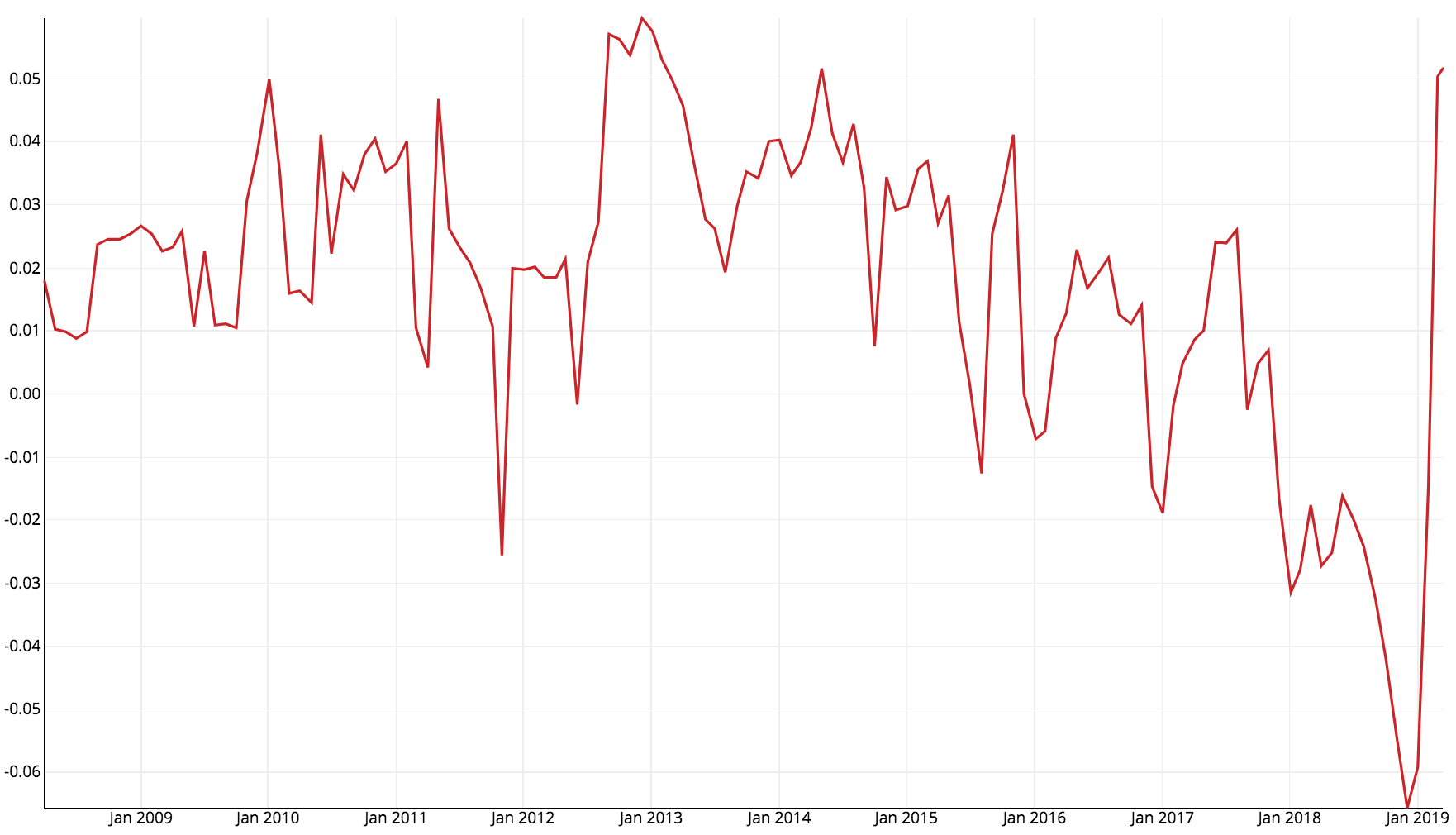 We observed last week that Japan's been a bit of a surprise Growth story in recent years. Interestingly enough, Japan has also maintained positive exposure to Value during much of this time, save for a dip in November 2011, and then a more recent decline starting around late 2015. Exposure hit a nadir of -0.07 in December 2018, and has since ripped back up to 0.05 over the past months, a level it had only touched a few times over the past decade. 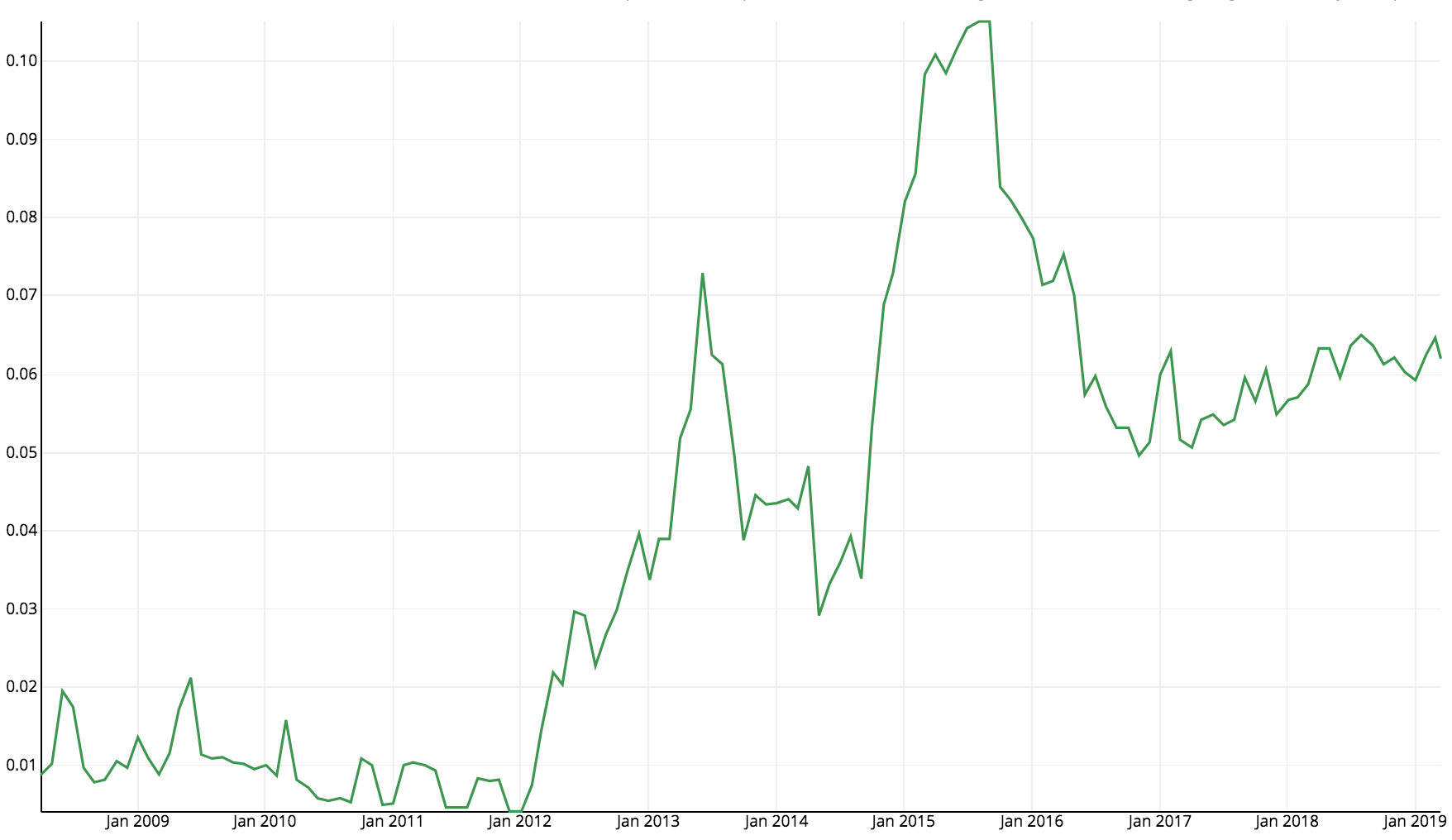 Korea is one of the few countries that maintained positive exposure to Value throughout this period, peaking at 0.11 in 2015, and then settling in around the 0.06 range over the past couple of years. Value-seekers might very well find some good opportunities in this market given the stability of Value exposure. 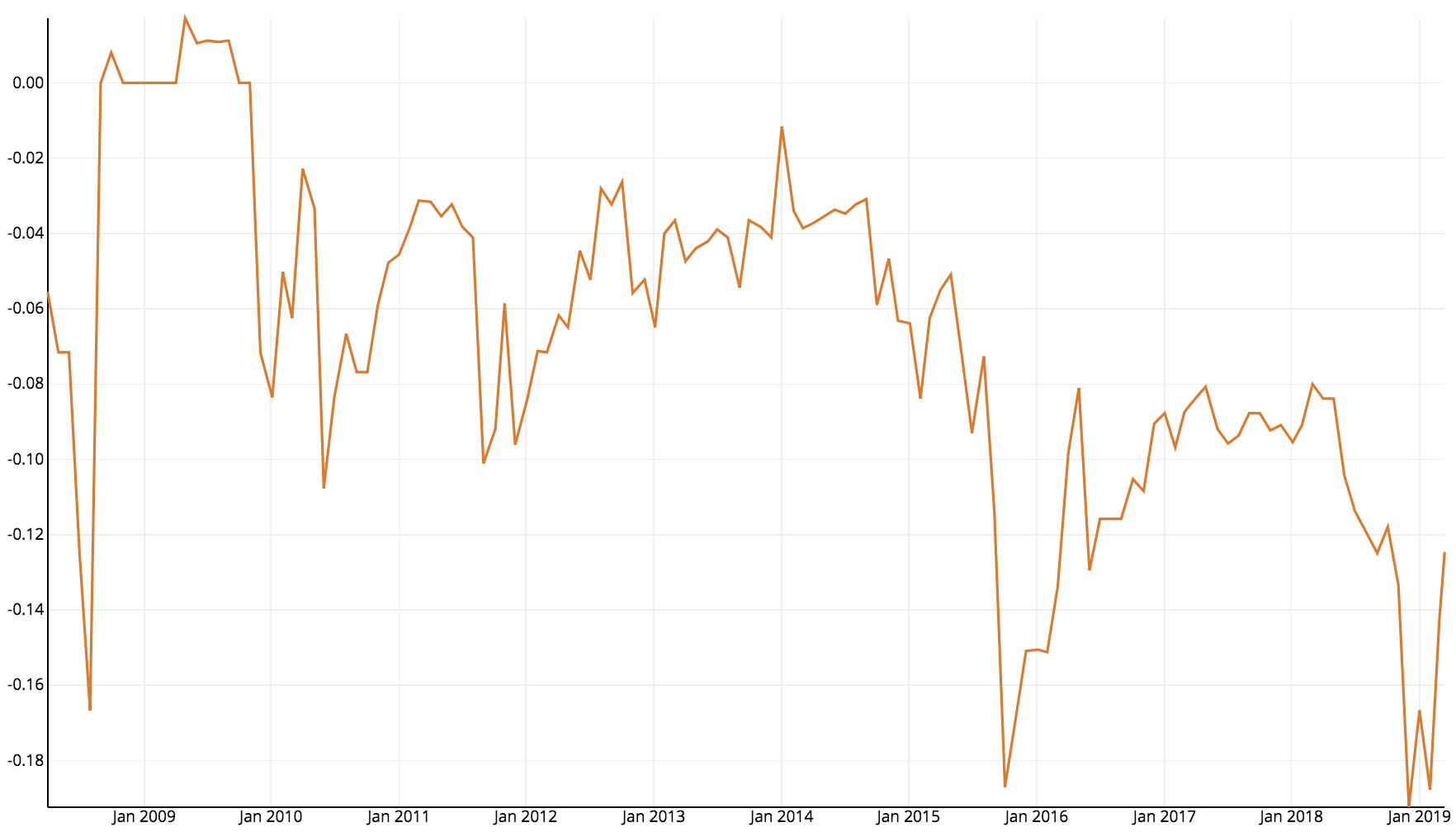 Seemingly an anti-Value market for the entirety of this date range, Australia only had positive exposure to the factor for a brief stint around the Global Financial Crisis and subsequent recovery. Since then, exposure has been consistently negative, dropping to a relatively extreme -0.19 at the end of 2015 and then reaching that level again in December 2018. A slight move up over the past month has left exposure at -0.13 today.

Here's a snapshot of the countries currently with the highest and lowest relative Value positioning in the ACWI Index: 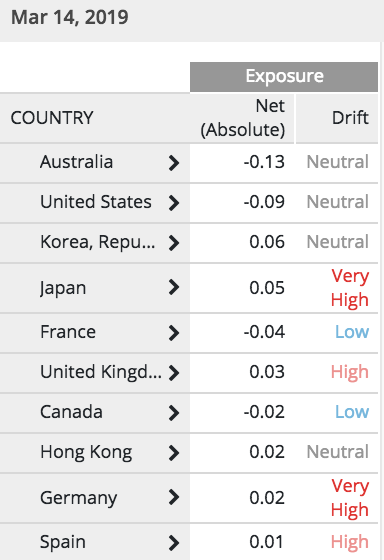 Based on these observations, Value-oriented investors currently have more opportunity to find stocks that fit their mandate in Japan and Korea, as their exposure to the factor in the ACWI is at relatively high levels today. Meanwhile, Australia and the US have pronounced negative exposure to Value, indicating that it's less likely to find such stocks in those markets at the moment.

Next week, we'll continue our series by taking look at a new factor to see what insights we can turn up. As always, if you'd like to see how these factors look in your portfolio, or would like to better understand how you can manage your factor exposure, please don't hesitate to reach out.