The Riskiness of Crowds

The Riskiness of Crowds

As we head full force into earnings season next week, I have been thinking about the most popular topics of discussion with our clients over recent months. Last Friday’s rocky market action set the backdrop for what is sure to be an interesting week ahead, as geopolitical developments and economic news mean there will be so much to parse. The focus will be on the sectors that will have most to gain from a positive resolution of the China trade negotiations, most notably the Technology sector. If “Phase One” of the deal leads to a more conciliatory outcome, investor’s more cautious stance of late may be reversed to this sector’s benefit. Financials will also be at the forefront, as their earnings season kicks off next week, and all eyes will be on the larger names, such as JPMorgan Chase, Wells Fargo and Bank of America. Analysts will be looking for guidance from these companies on the impact of lower interest rates and slowing growth.

This week’s Factor Spotlight will take a look at one risk factor that has been a hot topic this year — hedge fund crowding. Although concerns around crowding are nothing new, there is evidence that the degree of concentration has been growing steadily over recent years. One structural change in the markets that has contributed to this is the shrinking number of public companies available to invest in which has roughly halved over the last 20 years, while at the same time, the number of fund managers has increased. Bigger managers also dominate the scene, as smaller managers struggle to raise capital, thereby requiring larger position sizes. For these reasons, and despite the best efforts of portfolio managers to identify overlooked opportunities and build a diversified portfolio, equity trading strategies remain highly susceptible to becoming crowded.

As hedge funds are more likely to hold concentrated positions than traditional funds, as well as use leverage and short-sell, they have an important role in crowded positions in the investment universe. In February this year, equity hedge funds faired particularly poorly as too many crowded into the same names on the short side. Steve Cohen spoke about this at the Milken Global Conference this year, saying that one of his biggest concerns is that there are so many hedge fund managers “doing the same thing” resulting in a big fear of “collateral damage”.

The recent momentum crash in early September has further underlined the potential dangers of this effect. In our Factor Spotlight entitled Peeling the Momentum Onion, we dissected the Momentum crash in the Russell 1000 index and realized how crowded trades can bear the brunt of an unwind or rotation. Breaking down the list of names, long and short and grouping into sectors, we revealed that it was the most crowded hedge fund names that were driving the reversals, as growth was replaced with value and low-volatility names. The effect of higher leverage and declining liquidity magnified the move in the Momentum factor. A large proportion of the investment management community was caught off guard, incurring losses that put a serious dent in many year-to-date performance numbers.

Looking at crowded trades through a factor lens provides interesting information and uncovers areas that warrant a high degree of vigilance. Using Wolfe Research HF Concentration factor data, we evaluated the universe of names in the S&P 500. We eliminated the more illiquid stocks, filtering for those that had at least $10mn in average daily volume. We then went one step further in not only looking at the “copy-cat” names across hedge funds, but layered in another criteria to focus on stocks that have the most idiosyncratic risk. As a high portion of their Total Risk is idiosyncratic, they are vulnerable to changes related specifically to the company itself and not other broad factors, and could experience sharp moves on both positive and negative news surprises. The risk is especially magnified in the negative tail, as disappointing earnings or intensified fears of an economic slowdown could potentially result in extremely negative repercussions and concerted unwinding of positions across the holders. Academic research has shown that crowded trades are known to experience relatively larger drawdowns when the market is stressed compared to their less crowded counterparts. In addition, there is additive value in looking at HF Concentration as an overlay to traditional factors as it is independent from others in explaining hedge fund performance variation.

In the early spring, there was much concern over the FAANG’s (Facebook, Apple, Amazon, Netflix, Google) high degree of crowdedness and concentration across hedge funds, for both traditional and passive vehicles. Now it appears that the concentration has been shifting to the Healthcare sector, especially following the momentum crash in September. One good indication of sector crowding is in the composition of Goldman’s Hedge Industry VIP ETF which identifies “VIP” or Very Important Positions, defined as those names which appear most frequently in top 10 hedge fund holdings. Information Technology continues to dominate the rankings in this ETF, followed by Communication Services and Healthcare.

Now let’s take a much more granular look at the most crowded names from our screened universe through the Omega Point lens:

The names with the biggest exposures to HF Crowding in our screened universe are in the Healthcare Sector representing 6 out of the top 10 names:

One of the persistently crowded trades is Incyte Corporation (NASDAQ: INCY) with an enormous exposure of 4.89 to HF Crowding. The stock is also at an all-time high in exposure, particularly over the last few months and drifting higher. 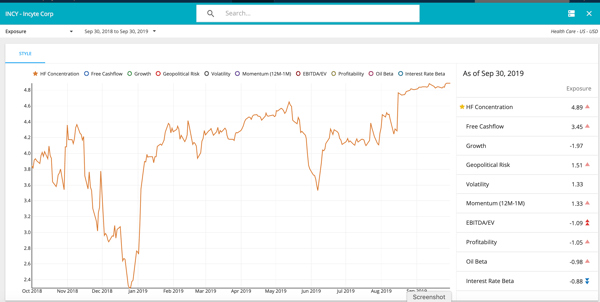 If we decompose Total Risk into its two primary parts, we see that Specific Risk accounts for a very large percentage, rather than Factor Risk, as shown in the chart below. The two red arrows on the right show that as of Sept 30th, Total Risk is on a clear path downwards, but Specific Risk remains extremely high.

Nektar Therapeutics (NASDAQ: NKTR) wins the award for being the most crowded trade with most idiosyncratic risk as well significant drift as hedge funds piled in over the last couple of months:

Crowdedness is becoming more widely recognized as an important part of the process in understanding equity risk exposures. Traditional managers should also take note, as there are significant implications for overlap with positions that are held by the hedge funds. Allocators should also take into account their risk in crowded trades across all of their manager investments, as the level of diversification in their aggregate portfolio may be misleading. The catalyst for de-risking does not necessarily need to originate from the hedge fund space and can be triggered anywhere, but this is where it is highly “combustible”. Although it can be difficult to track and monitor crowded trades, Omega Point gives risk managers and analysts the ability to easily evaluate this factor on an ongoing basis, at the portfolio/single security level and for existing/candidate positions, as well as in combination with other factors. 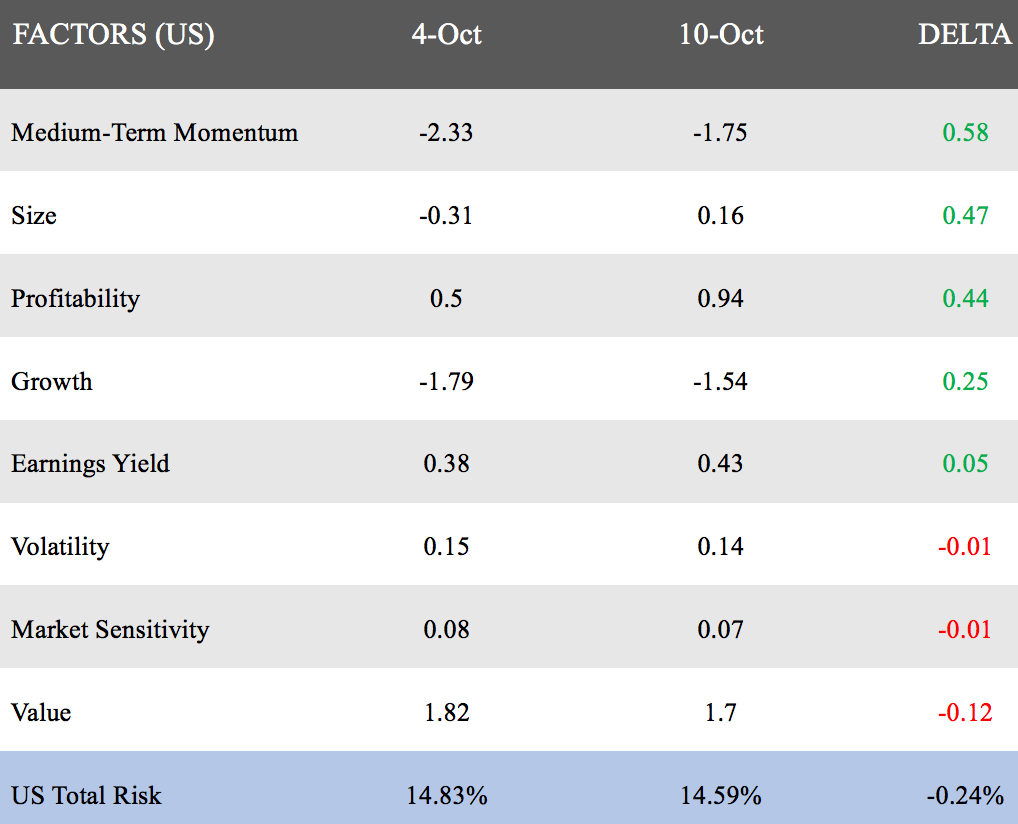 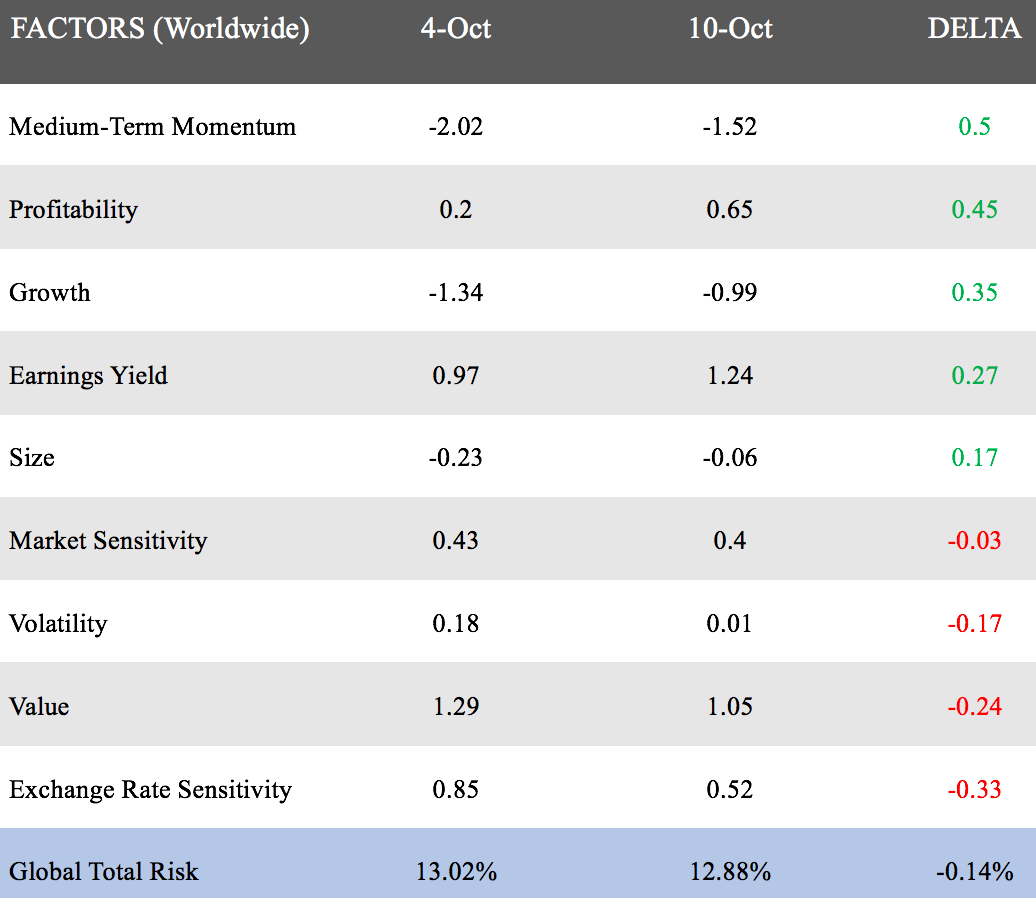 As always, we welcome your comments and insights.