The end of the year is good a time for reflection and analysis, and many investors take the opportunity to use the typically less hectic market period between mid-December and mid-January to examine their process, figure out what’s worked over the past year, and think about improvements for the next year. A key candidate for annual adjustment is the definition of the investment universe, or if the investment universe is fixed (e.g. on an external benchmark), the process to prioritize securities for analyst research.
To address the coverage and/or prioritization process, one of the preliminary questions to answer is “What qualities are typically associated with high-alpha driven stocks?” To help answer this question we’ve put together an analysis on alpha-driven securities in the Russell 3000 over the past 2 years. Below, we’ll share some of our results, as well as provide our weekly market and factor update.

What is an “alpha-driven” stock? Our definition centers on breaking down the volatility of a security. In particular, securities that are alpha-driven move because of micro-reasons largely specific to the company, and not due to external forces such as macroeconomic reports, politics, and sector moves. We call these alpha-driven moves “idiosyncratic risks” or “specific risks".

For the purposes of our analysis below we define an alpha-driven security as one where 2/3rds (67%) or more of its volatility is idiosyncratic.

The graph below shows the number and percentage of securities in the Russell 3000 that meet our criteria above, measured at the beginning of every month over the past 2 years.

We can see that the total number of alpha-driven names in the Russell 3000 has declined over the past two years. In particular, the 4Q18 market drawdown precipitated a big dip in alpha-driven names sending the percentage of alpha-driven names below 40%, and we haven’t seen much of a rebound since then. It’s clear the market has become more factor-driven over time, meaning that there has been essentially less “good” stock picking in 2019. 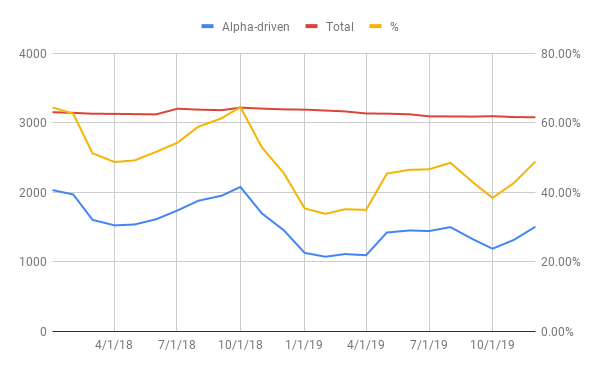 Although the total number of alpha-driven names have decreased over the past 12 months, we still see about 1000-1500 names in the Russell 3000 that qualify under our definition. Below we examine few key characteristics of the median alpha-driven stock versus the median Russell 3000 name. 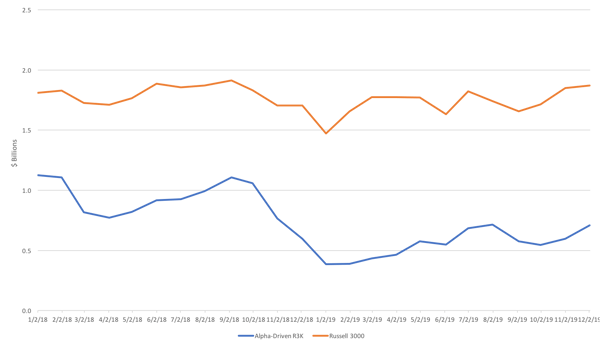 Unsurprisingly, the median dollar market cap of the alpha-driven names was lower than that of the broader Russell 3000 throughout this period. It has also decreased during the last 2 years whereas the median market capitalization of Russell 3000 name remained roughly constant. This is contemporaneous with the prior observation showing an overall lower count of higher alpha names and indicates fewer stock picking opportunities in the midcap and largecap segments of the Russell 3000. 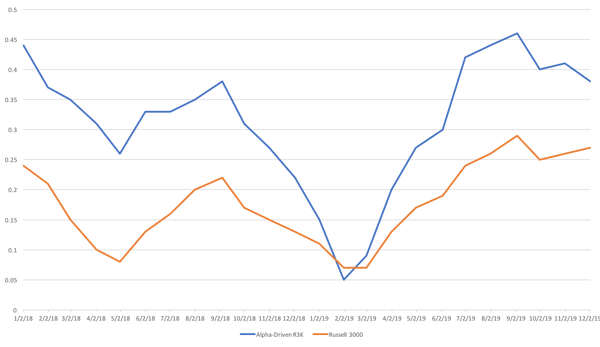 Note: All Y-axis values for factor exposures are expressed as z-scores

Liquidity is defined as the ratio of the stock’s ADTV (Average Daily Trading Volume) to its market cap. Interestingly enough, this chart shows that the higher alpha names have actually been more liquid than the broader Russell 3000, with the lone exception of Feb 2019. This indicates that even though these names aren’t as factor driven, they’re being traded at a higher frequency relative to the median security in the Russell 3000 index. This could mean that institutional investors are crowding these stocks, or perhaps that highly liquid and idiosyncratic sectors such as Biotech are driving this pattern. Next week we will dive into a sector-specific and crowding analysis of the alpha-driven securities to determine whether our thesis is correct. 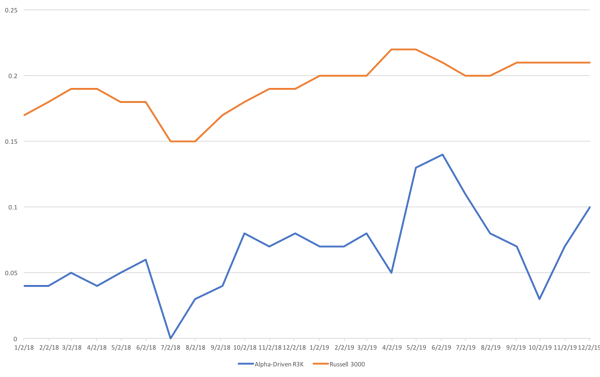 Relative to the Russell 3000, the alpha-driven bucket has significantly less exposure to Value, although this exposure appears to have increased over time. Value exposure reached a nadir in July 2018, rose to a peak of 0.14 in June 2019, and then fell pretty rapidly until rebounding in October. It now appears to be back on the rise, but still substantially lower than the broader index. 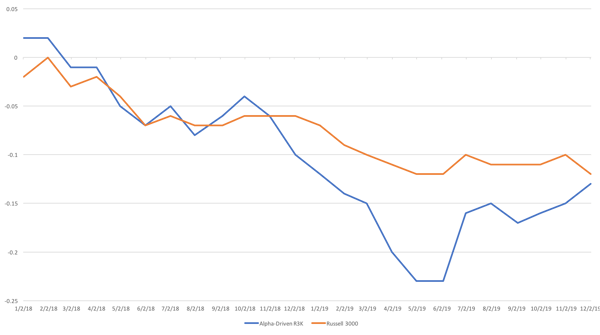 Perhaps our most fascinating learning here is that median Growth exposure for the high-alpha names has largely been lower than that of the index. Many investors assume that Growth names tend to have higher alpha characteristics, and may decide that this is where they want to focus their research efforts. But, as the data shows, companies with higher growth exposure have been more associated with factors over the past year.

Next week we’ll extend our analysis to the sector and industry levels in order to determine which industry groups have been the most alpha-driven during this period. 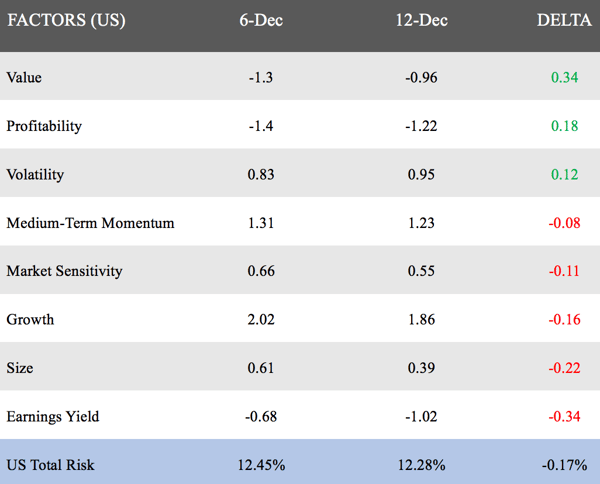 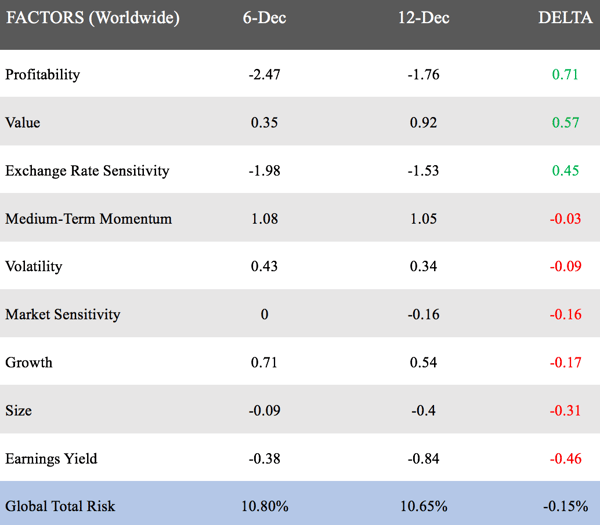 Please let us know if you’d like to learn more about our alpha-driven analysis, or better understand how Omega Point can help enhance your own investment strategy.